As the ads on the side of Facebook page weren’t enough, the company has found another way to fill up their pockets which is ironic considering the 19-billion that Facebook just spend on a single app. Facebook is calling them as premium Facebook Video ads. These ads were being tested since December.

The way these Facebook Video ads will work is that a 15-second long video ad will starting showing up on a Facebook user news feed without any sound which will pause or stop playing upon scrolling pass it, while users who are interested in the ad, can click it, which will result in a full screen version of that same ad with sound. For Facebook mobile app users, the Facebook Video ads will be pre downloaded when their phones are connected to a Wi-Fi connection for later use. This way Facebook will be kind enough to help them not raise the usage of their data plans. But again, it will eat up the storage space with the passage of time. 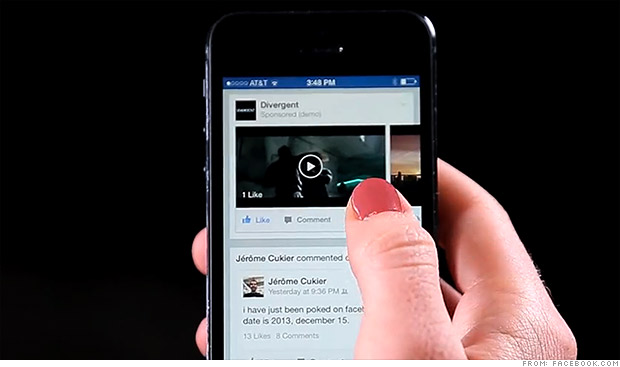 A few advertisers will be selected by Facebook which will bring high quality Facebook Video ads that will be targeting a specific audience same like the ads on television. The question that we ask our self after this announcement is that will the Facebook users be happy or will they stop using Facebook, the answer is No, as there is no strong negative reaction show by the users of Facebook to anything that the company decides to change on their social website.

After the successful deal on Instagram, through which Facebook will earn $100 million in a year by adding ads, sure did go well for the company that it has decided to bring it to Facebook as well.These premium ads could actually work because there hasn’t been any backlash seen from the users of Facebook till now, which makes Facebook change whatever they like about their social website without actually asking what their users like.