Batch files are usually scripting files that contain commands used in file launch execution. Batch files help simplify and even automate complex and laborious tasks. For instance, a batch file can be created to perform system cleanup tasks for removing junk files, executing a vital process, start or stopping back-end services, etc. Batch Files can hence,  perform lengthy tasks in a matter of seconds or in an automated method that reduces manual intervention to the execution of the BAT file.

Batch Compiler script is a simple tool that simplifies the process of creating batch scripts plus converting them to EXE file format. It even allows password protecting your converted executable files, in order to prevent them from being edited or accidentally executed. This is because BAT files can be easily mistaken for common TXT files and a user can therefore, accidentally execute the file while trying to view it’s content. Such protection is also useful because it secures batch files from misuse by another user. 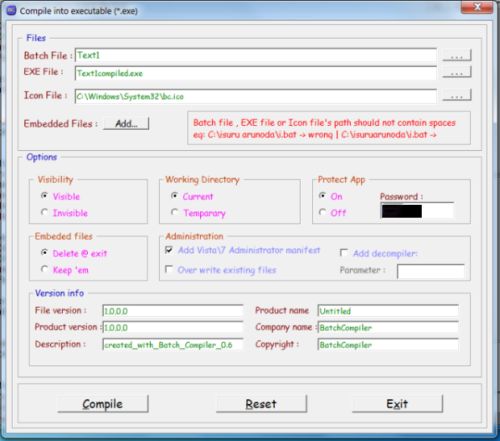 The options located on the top of Batch Compiler interface allows you to painlessly make batch files. The Commands portion on the right-hand sidebar contains a commands list that you can add to the batch script. For example, you can add start, shutdown, set, task list, cd (change directory), task kill and other utilities and functionalities to your very own batch file, by clicking the function’s name. Furthermore, you can also tweak text specification and amend background color of workspaces of batch scripts. After you have compiled your batch script, you can either save the script as a BAT file or select the Build EXE option to make a EXE file from the script.

If you intend to convert the batch file script to an EXE file, then you will have to specify the output directory, set visibility preferences, the working directory and other options, (such as adding the admin manifest and de-compiler).  As mentioned earlier, the EXE file can also be password protected. Other optional features include, the ability to add file or product version, description, company / product name and copyright information (if any). Click Compile to create the executable (EXE) file.

Note: If Batch Compiler halts at the splash screen, launch the EXE file from the data sub-directory (instead of the main directory). When converting batch files, you can use the built-in conversion option of “Batch Compiler” or launch the b2x.exe file, located within the data sub-directory, to launch the converter. While some may argue that in the presence of Windows Power Shell and scripting languages, batch files may appear obsolete, however, this seems to be quite inaccurate, since batch files are still one of the favorite methods of many users for simplifying their convoluted tasks. Batch Compiler is compatible with Windows XP, Vista and 7.