If you can’t live without Blackberry or the one of the amazing keyboards that the smartphone supports then you probably are worried about John Chen replacing the current CEO of Blackberry as he has a huge reputation for paying attention on the enterprise of the company and not the consumer handsets that the company makes which would eventually kill the handset business, but looks like that is not the case here.

John Chen said that Blackberry smartphones are the first priority of the company and will always be there because of the reputation that company have for having a secure smartphone when it comes to privacy and after the rumors about NSA being collecting data through other smartphones got out, this might be a chance for Blackberry to boost their sales. Even though it is still not sure whether BlackBerry provides data to NSA through back channels but as of now, it is the cleanest smartphone manufacturer which has no allegations like that. 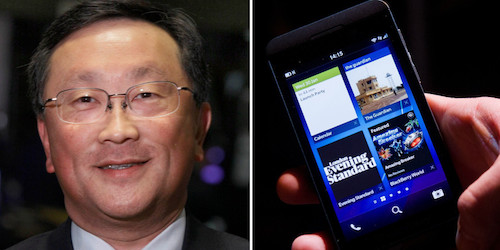 According to John Chen “People who love their BlackBerry have always appreciated that their device allows them to get things done. And central to our productivity focus is our keyboard“.

In a recent report, Blackberry reached 0% market share in the 4th quarter last year in US which makes it hard for it to still be competing in smartphones but John Chen said that they are currently working on high end smartphone and will also be covering parts of the US they have covered yet. Even though John Chen is working his best but it would take some good luck and the kind of smartphone hardware that can challenge the specs on the current flagship devices in order for Blackberry to make a difference this year. The physical QWERTY keyboard has always been the power point of BlackBerry sales. But with the world quickly transferring to touch smartphones, BlackBerry should now focus on bringing something out of the blue in order to turn the fortunes of the company in their favor.