Apple announced a lot of new features at the WWDC event. The highlights included big announcements about iOS 8, Mac OS X Yosemite, an improved Apple Store and a new programming language Swift. The conference lasted 2 hours in which the company tried to fit all announcements and their details. However the magnitude of changes is so large it became difficult to fit everything into their timeslot. Apple has introduced a dozen of new features into the latest iteration of iOS.

iOS 8 has included some very cool features which users will surely enjoy. The first feature which will be used by most people working in large offices is Wi-Fi Calling, which lets smartphone owners route calls over local wireless connections rather than through potentially weak cell service. Of course, your cell phone provider has to have the technology in place to support it. And according to our finding currently, only AT&T supports this technology in the US. 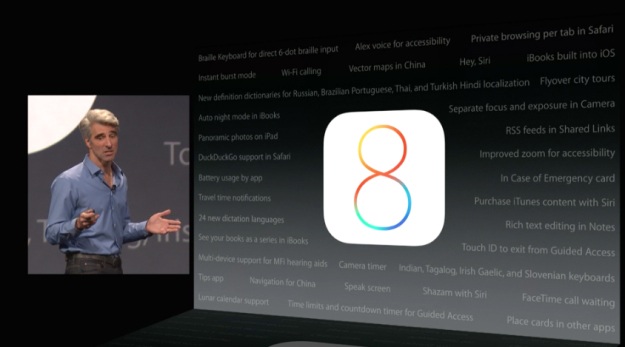 For those who are a little paranoid over piracy. Apple has included an option to select DuckDuckGo as a default search engine in Safari. DuckDuckGo differs from other prominent search engines in the sense that it does not cache any user data in order to target ads. etc. With recent updates giving the privacy-focused search engine capabilities on par with Google, leaving Google’s world is more appealing than ever for those who don’t rely on it for mail and other tools.

One new feature that just made its way to iOS from its desktop cousin is battery usage by app. While OS X Mavericks let users see which apps were gulping down power. In iOS 8, that information is now available in the same part of the settings menu that shows how you’re using storage on your phone or tablet.

Just like the “OK, Google” command on Android, a new voice command feature ‘Hey, Siri’ lets you summon Apple’s virtual assistant without touching your device at all. However unlike Google phones your iPhone has to be plugged in a power source in order for Siri to respond.