In a new metrics released by Apple that shows the adoption rate of iOS 9, the strength of the latest version of Cupertino’s mobile operating system has been highlighted in comparison with its competitors. 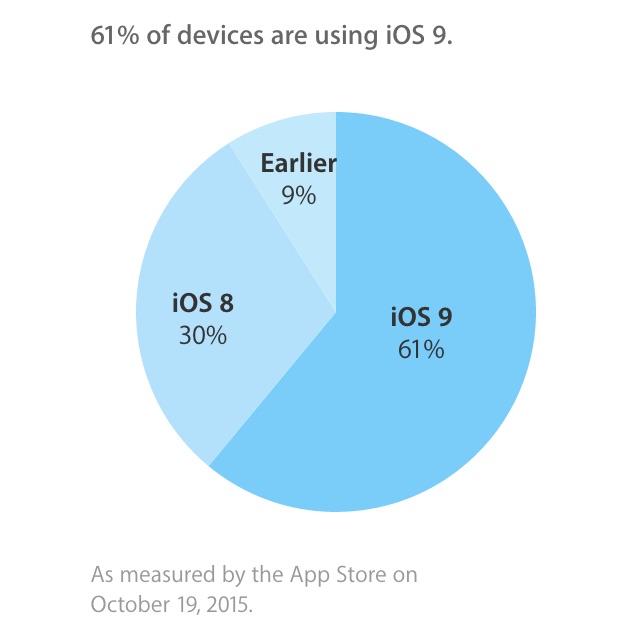 Officially rolled out in mid September, iOS 9 has taken only a little more than a month to achieve such feat, which is remarkable in itself. However, the tech giant has a vague explanation about how it has managed to reach the current adoption level of iOS 9. It did not even disclose how the figure was calculated, which leaves more room for doubt than belief. As it is, the figure is to be taken with a grain of salt.

In contrast, Android remains to have an adoption rate of 23.5 percent for a period significantly longer than that of Apple’s calculation. The way the percentage has been calculated, nonetheless, is more transparent than Apple’s way. Google states that the figure is based on the number of Android devices that have been used to log in to the Google Play Store for a period of seven days.

But there are more compelling reasons why Apple is probably dominating the sales figures and why it presents more benefits and advantages than Android does. On the security side, iOS is really preferable than Android, as explained by the security breaches that hog the headlines every week.

In the event of a security compromise, iOS (or iOS 9 in this case) has the easier means to deploy a software fix as quickly as possible to hundreds of millions of devices running the operating system. It does not have to face the challenge of diverse manufacturers, such as the case with Google’s Android.

Android at present always has difficulty patching security vulnerabilities because of the variety of platforms that run the mobile OS. It takes a longer period to roll out any updates to Android devices. That means if there is any security loophole found in Android, it is likely to stay for a bit longer.

For example, some of the benefits offered by iOS 9 include fixes to bugs that come with app updates and a patch for the security flaw involving Jailbreak exploits. All these factors help to retain the iOS user base.