Looks like Apple would have to rely on chips provided by Samsung for more than a few years this news came from the supply chain over at Apple. Samsung has been helping Apple smartphone and tablets for the past couple of years with their chips and looks like Apple won’t quit on Samsung just yet as it’s still relied on their chips for at least 2 more years.

Samsung provided Apple with their A7 chips currently used on their high end device like the Apple iPhone 5s and the iPad and will also come up with new chips made on 14/16nm FinFET processes for the year 2015 as well, though Samsung is not the only one in the run for making chips for Apple as a company named TSMC will also be coming up with the same kind of chips made on the 14/16nm FinFET processes alongside Samsung. 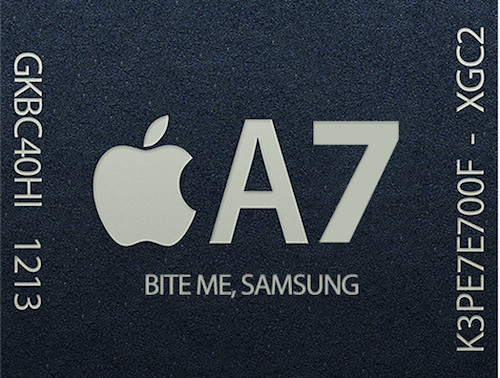 Now Apple has tried a lot to come up with another manufacturing other than Samsung because of the heat that both of the companies have in the market and in the recent court rooms but looks like with Samsung being responsible for making their A chips it’s hard to. Apple is stuck with Samsung that’s for sure but it’s hard to tell anything right now as the customer and the producer both keep each other’s information confidential and aside all that there is always production problems because of the high demand of Apple smartphones in the market.