With the smartwatch market growing at an alarming rate since last year, Big G stepped up its plan and recently released the much touted Android Wear platform for smartwatches.

Big names like LG, Samsung and Motorola have already announced their respective wearables. The former two are available as of today, while Moto 360 is yet be released. Regardless, HTC, a fairly big name in the Android world was missing. Until now, that is.

According to a latest leak, it seems HTC is gearing up to announce the company’s first ever smartwatch. Ignoring the fake interface, however the watch is very much real. HTC will follow Samsung and LG in the design department, with a square shaped design. Although, it doesn’t look bad, it lacks sleek elegance of the Moto 360. Though, HTC’s work does look better than fellow rivals Samsung and LG, preferring a stell built strap over the generic looking strap on the Samsung Gear Live and LG G Watch. 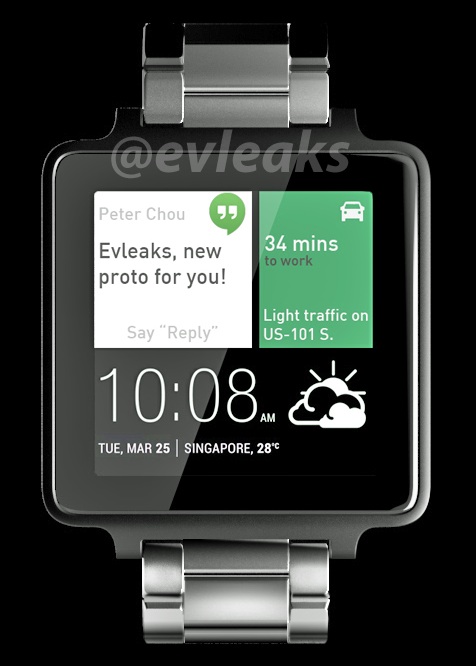 HTC is expected to unveil the watch later this year. Around the same time Apple is set to announce its much rumored iWatch. Needless to say, the competition is heating up in the wearables front too. Although Android dominates when it comes to numbers, iOS is not too far behind it. Apple’s domination of the tablet realm is a resounding example of the fruit company’s ambitions to innovate and dominate. Android will need to step up its game if it wants to take the lead.

With software aspects lock down, thanks to Android Wear, much of the innovation will most likely take place on the hardware and such. HTC has a reputation of releasing sleek and elegant smartphones, the company’s flagship, One (M8) is an example. Hence so, we expect HTC to work its magic on its upcoming smartwatch as well.