Windows RT has come to the market with a bang because curiosity about this Mircosoft operating system is raging high. Even though there have been comparisons with Windows 8 in the beginning, soon it became apparent that RT is in a league of its own and comparisons with the more straight forward features of Windows 8 is unfair. Windows RT can only run the high-end Metro style apps- whether it is a limitation or sophistication is open to argument. It is so fundamentally different from the run-of-the-mill Windows OS that Microsoft has told Firefox, it isn’t Windows anymore!

The basics of Windows RT

Windows RT is supposedly a special edition of Windows 8 – yet, it has no 8 in the name. Probably this is due to the very different experience the two OS have to offer. Here RT is an acronym for run time. It is significant because unlike Windows 8, which works with two ‘run times’ (or application programming interfaces), Windows RT has only one. As a result, Windows 8 can support all traditional Win32 programs and Metro style apps, but Windows RT lends support only to Metro apps. Metro apps are core programs developed by Microsoft that allow accessing photos, videos, emails, maps etc. along with the Office apps and Internet Explorer 10. It is rumored that an e-reading app by Barnes & Noble will also be integrated. So, if you want a Windows 8 experience, buying a device with its ‘special edition’ will hardly serve your purpose. In a way, Windows RT is like a tablet-oriented version of Windows Phone with its simplistic but chic, tile-based Metro apps. 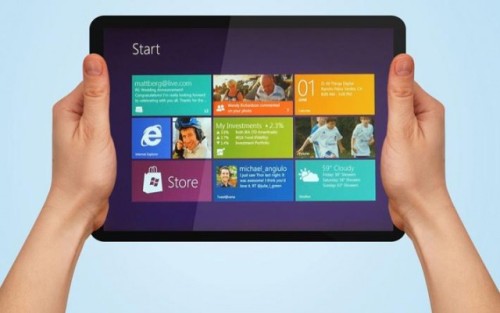 Simply stated, Microsoft needed a trump card to make a stand in the arena where Apple has already built its own league. This trump card comes in the shape of ARM, which has powered a plethora of mobile phones, Smartphones and notably iPad and iPhone. So, Microsoft could not have been more blatant about their intention as they launch Windows RT, the first Windows on ARM.

Whenever you talk Windows RT, ARM inadvertently comes up. Unlike Windows 8 which runs on Intel processors (that most laptops and PCs run on), RT runs on ARM (which lends support to Smartphones and tablets). Due to this difference in architecture, it does not support software written for Windows generically, but can only run apps written specifically for WinRT (the OS that runs only on ARM). ARM are basically mobile chips, so Windows can now run on processors like Qualcomm or Nvidia, instead of its earlier staple Intel. This takes Microsoft one step closer to its adversary, Apple because of the processors’ success in the tablet market. ARM uses power at a much lower rate, so it ensures a longer battery life, which makes a big difference in tablets and smartphones.

Windows RT does not have a conventional desktop owing to its strictly Metro apps so you may miss a lot of third party apps that you are utterly fond of. The Metro apps will be pre-installed in Windows RT devices because the OS is not going to be put up for sale separately. Undoubtedly, the number of apps will increase after release, but it is difficult to catch up on the variety of Apple or Android. As of now, there are Microsoft’s core apps which have Metro versions. The entire Office suite of Windows has been given a Metro avatar, so that will be in all Windows RT devices. As these devices will be most like tablets, it is expected to be a big hit with those who want the full professional features of the MS Office in lighter devices than laptops. Windows media Player, sadly, isn’t included. Microsoft has assumed a rather monopoly over Windows RT because no non-Microsoft, third-party app can be installed unless it is Metro style which is another way of saying it has to be Microsoft approved. However, whether this will make its market venture easier or not, only time can tell.

The lack of some enterprise features like Boot from VHD, Client Hyper-V, Encrypting File System etc. is stark in Windows RT and may pull back some of the users from jumping to buy it at the first opportunity.

Microsoft has made it clear that Windows RT will not be available to be bought separately and installed on a device. It will come in-built in tablets, but all Windows tablets won’t necessarily run on Windows RT. Most Windows 8 tablets will not support Windows RT because the former can run both Windows core features and third party applications.

So far, Windows RT has roared at the competition, with specs and features setting critics astir. But how it will fare in the market, if it will stand the test of time (and tablet fanatics) will be revealed in the coming years.