Xiaomi is a smartphone brand not many are familiar about, probably because of their presence in China only, or mostly China. Unlike many other manufacturers in China, Xiaomi is apparently a very good brand, and has drawn comparisons from Apple. Although, the last bit is a bit much, but you get the gist. Xiaomi is well most notably known for their popular MIUI custom ROMs present on many devices, and mainstay in their smartphones.

Xiaomi’s smartphones are quality, and light on the wallet. Speaking of smartphones, the rumor mill was kind enough to bring us some details on Xiaomi’s upcoming flagship smartphone – the Xiaomi Mi4. The phone has leaked a number of times before, but the pictures were incredibly blurry. Not this time, though. The new round of leaked images depict the Xiaomi Mi4 in its full glory. 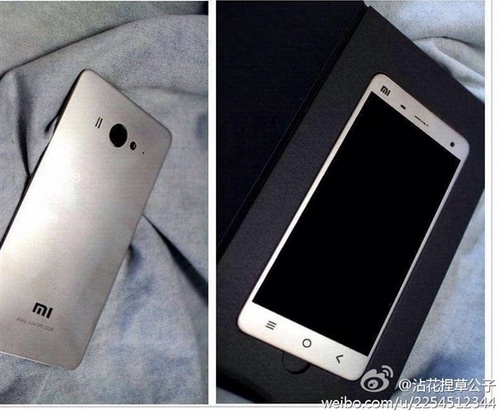 The smartphone features your usual smartphone design with rounded edges for better ergonomics. The front features embedded ‘Menu’, ‘Home’ and ‘Back’ capacitive buttons. The back, although looks like a metal finish, it actually isn’t. Xiaomi pulled a LG, by using a material that imitates a metallic look, akin to what LG did with the G3. A lot of people actually praised LG of using metal body for the LG G3 and it’s one of the reasons LG G3 is currently sitting on top of the market in terms of looking.

The Xiaomi Mi4 is fairly well equipped in the specs department. It is powered by a Qualcomm Snapdragon 801 quad-core SoC @2.5GHz, 3GB of Ram and 16GB internal storage. The rear camera is a 13MP unit with flash, while the front-facing camera is a 5MP affairs. The display is a Full HD (1920×1080) 5-inch touchscreen. The device supports 4G LTE, and packs a beefy 3000mAh battery. The Mi4 is expected to run MIUI v6, using Android KitKat as its base, we assume.

The Xiaomi Mi4 will be announced tomorrow.