By looking at the two rivals, the appearance of each is already a huge difference. The Mac has a sleek appearance with great design lines. It speaks of a hard workers tool. Your PC gives the impression that it takes hard work to operate, which is in many instances the case even though it seems easier to operate.

The Mac may seem difficult to operate, but it is because you expect it to be difficult. It is simpler to operate and is much more reliable. This is because there is less configuration and there are less processes. It is easy to access as it has a dock from which to operate and comes as a standard feature on your Mac.

Purchasing a Mac vs a PC

There are many reasons why you would want to purchase a Mac.  One of the reasons is that it would have nearly zero viruses. You do not have to battle to get hold of the best virus protection as you would with your PC. Even with the virus protection, you could end up with one, two or more on your PC, which slipped though the cracks. For many years, the Mac has been the preferred computer to use for graphic designers, filmmakers, for animation, video editing and so forth. Even though many of these disciplines have started utilizing PCs as well, the Mac is still supreme. 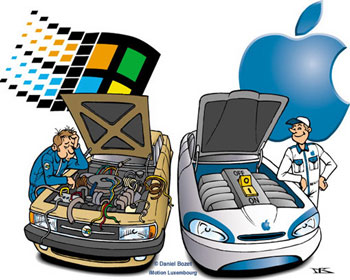 The differences are also seen in the pricing. PCs have a wide range of pricing from the low-end to the high-end. This is because there are hundreds of outlets selling different brands of PC. You are also able to build your own PC from scratch using different brands of hardware. The Macs are built by Apple, and are sold by dedicated outlets. It is therefore much more costly than your PC in general, although, the PC depends on whether it is high-end or low-end.

The Difference between the Software and Operating Systems

PCs as well as the Macs have dedicated software programs. This means that you are not able to interchange software packages between the two. The reason is that you have two different operating systems. Your PC has applications, which run solely on the Windows platform, and the applications on your Mac runs solely on your Macintosh Operating System (Mac OS X). However, you do get software packages that offer versions for both systems. Examples are the graphics packages such as CS5, and Apple iTunes as well as Microsoft Office.

By looking at the differences, you would decide what it is that you would need. The Mac gives you a good run for your graphics even at the low-end. If you therefore do graphics, it would probably be a good idea to purchase a Mac with its full packages. If your daily task will only be word processing and data processing, you would probably benefit more with a medium- to high-end PC.