The PIPA bill, more formally known as the bill to Protect Intellectual Property Act, has been an issue for months now. However it has been put on the front table now that Congress was expected to vote on it come Tuesday. However, the Senate majority leader halted on PIPA plans for the time being, at least until there is a uniform acceptance on the contents of the bill. The second part of these copyright bills is the most well known one, SOPA or Stop Online Privacy Act. SOPA has also been pulled on Friday, until it’s better revised. 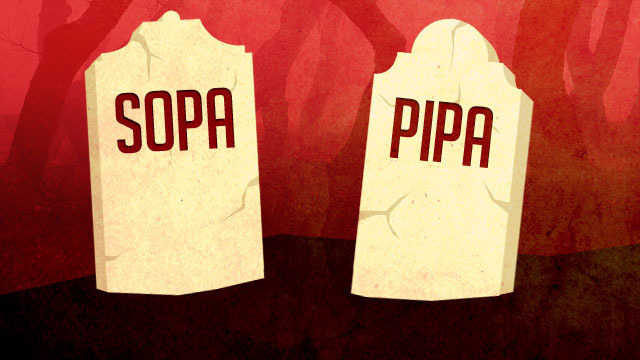 “The problem of online piracy is too big to ignore. American intellectual property industries provide 19 million high-paying jobs and account for more than 60 percent of U.S. exports. The theft of America’s intellectual property costs the U.S. economy more than $100 billion annually and results in the loss of thousands of American jobs. Congress cannot stand by and do nothing while American innovators and job creators are under attack.”

“The online theft of American intellectual property is no different than the theft of products from a store. It is illegal and the law should be enforced both in the store and online.”

“The Committee will continue work with copyright owners, Internet companies, financial institutions to develop proposals that combat online piracy and protect America’s intellectual property. We welcome input from all organizations and individuals who have an honest difference of opinion about how best to address this widespread problem. The Committee remains committed to finding a solution to the problem of online piracy that protects American intellectual property and innovation.”

The House Judiciary Committee will postpone consideration of the legislation until there is wider agreement on a solution.

Both decisions follow the stand that many websites took against SOPA and PIPA on Wednesday by closing or making some form of an edited change to their website. Wikipedia, for example, cut off their site for the whole day. Websites like WordPress.com and Wired, added censors. Tumblr also made it possible for blogs to choose whether or not to censor their blogs for the day. With these and other individual oppositions, it seems like SOPA and PIPA, while not dead, are not as strong as the beginning of this week.