And just like before, with Tipo they have again delved into their past for inspiration, and this time it is from the scrapbook from the Sony Ericsson era. The strong point of Sony Xperia Tipo will be its softwares. While its predecessors had to wait for the upgrade from the Gingerbread, Tipo comes with the Ice Cream Sandwich. It has a catchy a design, which coupled with its modern OS, is bound to attract attention, for what is essentially another Smartphone with modest features and a similar price tag.

Sony Xperia Tipo is one first Smartphones from Sony to go for a rounded design, with beveled sides, which is soft to feel and touch. On the front, the design is just like the normal Sony line, but with the rear they have gone for a much Samsung-like design. But, the difference in them is the use of minimum gloss on Tipo, which is mainly at around chin. Otherwise, most of the finish is matte on the rear side, giving a healthy look to the device. The plastic used on the body is same fingerprint-resistant variant on that of Xperia go, but it is a bit coarser. This may feel odd at first, but the additional grip provided is solid.

On the front, above the screen is the proximity sensor along with the earpiece. Below the screen are three keys – back, home & menu. On the left side is the USB port, serving both data and charging needs. On the right is the volume rocker and lanyard eyelet. On top is the 3.5 mm audio jack and the power button. At the bottom, there is only the mouthpiece. Going to rear portion, we find the 3MP camera at top, and the loudspeaker at the bottom. The microSD and Sim slots are located below the battery. 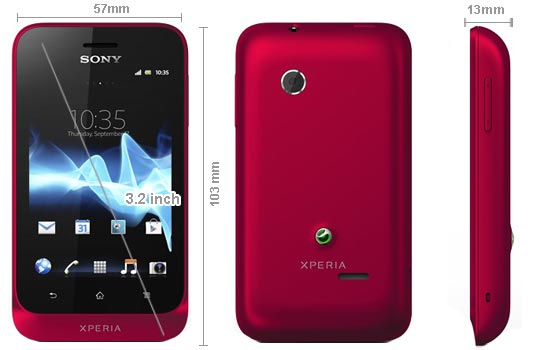 The display on Tipo is the 3.2″ HVGA LCD. It does not have any kick in it, due to the lack of bravia engine. With its modest sunlight legibility and viewing angles, it can be at best it can be described as OK, which is to be fair good enough for its class and range.

Sony Xperia Tipo run on a 1500 mAh Li battery, which has been rated to be at 470 h in 2G and 545 h in 3G while idling. The talk time has been found to be 5h for 2G and 4.5h for 3G, which in normal circumstances would make the phone run sufficiently for a day or two.

Sony Xperia Tipo supports quad-band on GSM/EDGE/GPRS and dual–band UMTS, with 7.2 Mbps on HSPDA and 5.76 Mbps on HSUPA. The screen is a capacitive TFT touchscreen of 3.2″ with HVGA resolution of 320 x 480 pixels. It runs on Android ICS version 4, powered by an A5 CPU from Vortex, along with an Adreno 200 GPU on a Qualcomm chipset. It has a 512 Mb of ram with an internal storage of 2.5 Gb. It has a microSD slot which can support expansion upto 32 GB.

The camera of Sony Xperia Tipo is a 3.2 MP one with fixed-focus and geotagging, with video support in VGA at 25fps. The connectivity options include the GPS, Wi-fi, USB and stereo Bluetooth. Other features include the 3.5mm audio jack, stereo FM with RDS feature and the proximity & accelerometer sensors.

For its price-tag, Sony Xperia Tipo is quite a good entry-level Smartphone with some very good features. Its lack of HD support is definitely a big drawback. Other cons include its lack of flash & secondary camera, average screen,  and its lack of Xvid/Divx support. But, for an entry level Smartphone with an affordable price tag, having the ICS definitely takes some of the unwanted attention away from its cons, and could prove to be a good buy for many.

For a Smartphone having an affordable price-tag, this is quite a bargain buy, with added bonus of the latest Android system. It may lack some features, but those are definitely made up for by the features it does have, giving a solid performance altogether. Go for it, if you are new in the Smartphone arena, and want to first try out the quieter waters before plunging deep.