Gone are the days, when Sony would have to hold back on its pursuit of technological advancement primarily due to the tie-up with Ericsson. That association was holding Sony back was evident from the numerous smartphones launched by the entity which just always fell below the Galaxy S lineup or the HTC contemporaries.

Now on its own, Sony has certainly come out all guns blazing. Sony Xperia T, the newest member of the smartphone stable in the Sony certainly has got enough gun power to take on the big boys. What now remains to be seen is whether it can satisfy the ever-increasing needs and tastes of the smartphone users. Powered by the chipset S4 from Snapdragon, with features like a totally up-class 13 MP camera with 720p display and recording, it has got enough on the resume to make it big in the market.

Sony Xperia T has a clear and quite distinct design, much of which can be attributed to the Sony Ericsson Xperia Arc. The rubber back, gives a feel good, safe touch feeling, which is nicely complemented by its sculpted sides provided safe grip. The space around screen is well utilized on the top but not so much at bottom. On the top side is the audio jack along with the secondary microphone. On the bottom side, is the main microphone. On the left is the USB port, while on the right are the controls for locking/power, volume and shutter, along with the slots for microSD card and microSIM. 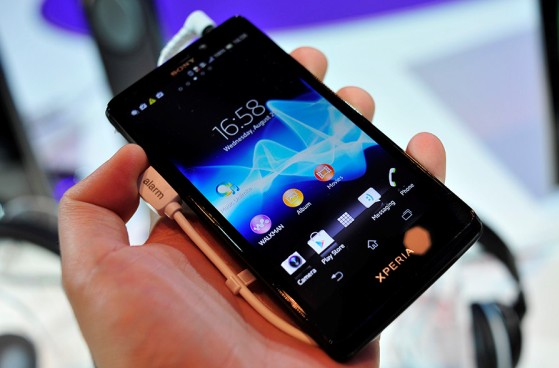 Sony Xperia T is supported over Quad-band GSM/EDGE/GPRS, with 3G connectivity at 5.76 Mbps on HSUPA and 42.2 Mbps on HSDPA networks. It has a mega 4.55″ capacitive (16M-color) LCD touchscreen with backlights provided by LED, and has a resolution of 720 x 1280 pixels or 720p. The screen is based on the Sony Mobile Bravia engine with a scratch-resistant glass on the top. It is powered by the Android Ice Cream Sandwich version 4.0.4.

Sony Xperia T is run on the dual core CPU from Krait at 1.5 GHz, and has a 1 GB RAM, Qualcomm chipset from Snapdragon (MSM8260A), and an Adreno 5 GPU. But, what is bound to prove of its triumphing factors is its a-class-above-the-rest camera of 13 MP with autofocus, LED flash, and features such as the multi-angle shot and geotagging. It supports 1080p video recording with autofocus and stereo sound up to 30 fps. On the front is the 1.3 MP camera, which also supports recording of 720p video.

The connectivity options of Sony Xperia T includes the wi-fi b/g/n, DLNA, USB port & host support and a 3.1 stereo Bluetooth, along with GPS having features of GLONASS and A-GPS. It has an in-built storage of 16 GB with additional storage in form of microSD card support. Other features include the proximity and accelerometer sensors, NFC support, FM radio having RDS, 3.5 mm audio jack and Facebook integration. One thing sure to excite all the gamers is that the device is playstation certified with full access to PS store.

Some of the things going against the smartphone are its below-par viewing angles in display, modest battery back-up, poor loudspeaker, and its slightly thicker body as compared to its rivals. In addition, the video recording is not up to the standards expected from the specifications, and the fact that the jelly bean update will not available at its launch will go against it. But, if we are able to keep all that out of our minds, then there are enough features to satiate our demands, which along with its smart design and interface will surely not let the users down. But, what will make it stand apart is definitely its excellent and truly great chipset from SnapDragon, which will definitely give it some tooth to fight it out in the smartphone maket.

Sony Xperia T certainly has the features and looks, to take on its much established rivals, especially with its excellent chipset. There are definitely certain areas which does look vulnerable and not up to the mark, but the start made by Sony is encouraging, and we can certainly hope that in future, Sony will be able to keep all its bases covered the next time around and give us a smartphone to rival that of its competitors.