After the huge announcement of their flagship compact smartphone Sony is now going towards phablets which are targeted towards the mid-ranged side of the market. They just announced two new phablets the Xperia T2 ultra and the Xperia T2 Ultra dual and the only different between the two phablets is the option of a dual sim slot on the Xperia T2 ultra dual.

Phablets are known for their giant screens and that is the case with these two as well as both the Xperia T2 Ultra and T2 Ultra dual will have a 6-inch Triluminos display supporting a resolution of 720×1280 pixels. Under the hood there is a Qualcomm Snapdragon 400 processor clocked at 1.4GHz, 1 GB of RAM and 8 GB of built in storage which can be expanded with a micro-SD card. 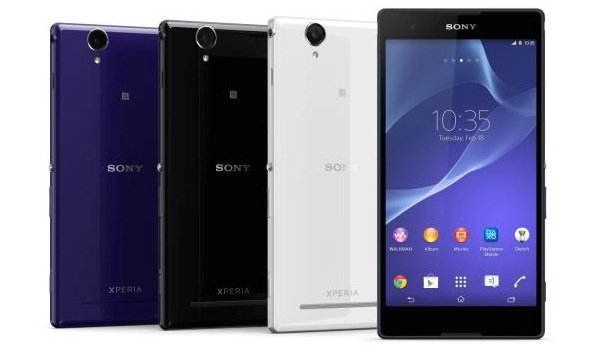 They both have a front and a back facing camera whereas the back camera is 13-megapixels Exmor RS sensor while the front camera is 1.1-megappixels Exmor RS sensor and all of this will be powered by a 3000mAh battery which will get you through a day just fine. Xperia are known for their sleek and stylish design and there is no exception when it comes to both the Xperia T2 Ultra and T2 Ultra dual as well as the phablet is only 7.6mmthick and it’s just amazing to see a phablet that slim supporting a good hardware not to mention the large battery.

These two phablets are set to release globally and will be hitting the markets over at Asia Pacific, Middle East, Africa and China. As far as the release date and the price of the T2 Ultra and the T2 Ultra dual goes we didn’t hear anything from Sony, but Sony did say that the Xperia T2 Ultra will have a mid-ranged price and judging from the hardware that the phablet packs we can say around $500 to $550 at most. Sadly the phablets are not waterproof like Sony’s other flagship devices. Sony also came up with another smartphone the Xperia E1 which is a low end device and will be supporting a dual-core and a 4-inch display.