The Samsung Galaxy Rely 4G gives you the best features of both the worlds. With a 4.0″ Super AMOLED screen which adds beauty to everything you see on the display and a sliding QWERTY keyboard which allows you to type faster, easily and accurately. Finally the Relay 4G has made its way to the United States market. Samsung Galaxy Rely 4G has mainly been designed keeping in mind the heavy demand for messaging by users.

Relay 4g carries a solid look which you’ll find on most of the Samsung sets. But makes this handset different from the other Samsung sets is a 4 inch WVGA 480 x 800 Super AMOLED Screen which gives it a bright and rich look. With 4.96 x 2.56 x 0.53 inches dimension, the entire set is made of black plastic with a lightly textured black panel. It has large Home key below the display, supported by a responsive, capacitive option buttons and a Back key. The 4 inch screen is perfect for typing. It has a micro HDMI port and a Near Field Communication chip. It sports a LED light at the upper left corner which notifies for anything and everything which comes on the phone. The design of Relay 4G is quite similar to Samsung’s very first Galaxy S. 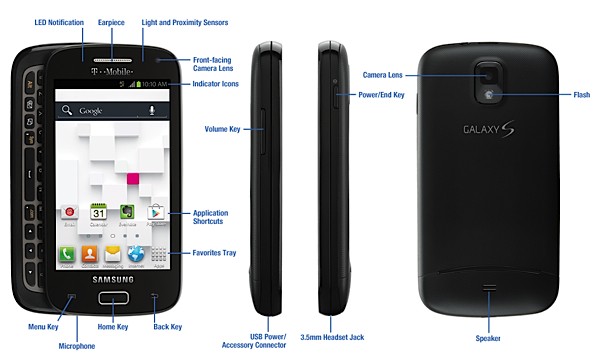 The Galaxy S Relay 4G has a battery of 1800mAh battery which lasts up to 8hours. The battery when used with Photon Q 4G works for 6 hours and 18 minutes while with Motorola Droid pulled through 7 hours and 15 minutes. However, in day to day use where composing email, taking pictures and phone functions are carried the battery works for 11 long hours. Thus, the battery gives quite a satisfactory performance.

The phone supports 1.5 GHz Krait dual core Qualcomm Snapdragon S4 processor, Adreno of 225 GPU with 1 GB of RAM and 8 GB of internal storage memory which is expandable up to 32 GB. It has Quad band GSM and quad band 3G support. It runs on 42Mbps HSDPA and 5.76 Mbps HSUPA support. It runs on Android 4.0.4 Ice Cream Sandwich along with Samsung’s latest technology of TouchWiz launcher. It sports a 5MP autofocus camera with LED flash. The Relay 4G records a 720p video at a fluent 30 frames per second indoors and outs. It has a 1.3 megapixel front facing camera which allows video chats. It has a slide out five row QWERTY keyboard. It features GPS with A GPS connectivity and digital compass. It has an accelerometer, gyroscope and proximity sensor. It supports Wi FI 802.11 b /g/ n. It holds a standard 3.5 mm audio jack and a stereo Bluetooth v3.0. It comes with a File manager which is pre installed, rich video format playback support and NFC support with Android Beam. It shows amazing graphics, seamless videos and uninterrupted gaming and without interruption gaming and webpage surfing which takes 0 seconds to load. It has an enhanced interface and all the Google features like Gmail, Google Search and Google Talk. It has Google Play store which has more than 6, 00,000 apps for you to choose from.

The only disadvantage of this set is that 5 MP cameras do not go with the rest of the phone or its price and it has no dedicated camera button. The screen lets you down due to its PenTile Matrix. The Smartphone is hardly a looker as it just has a normal look and nothing special.

The Samsung Galaxy S Relay 4G is a perfect good keyboard Smartphone launched by Samsung. The combination of QUALCOMM Snapdragon S4 and Android Ice Cream Sandwich is very good. It gives you a better typing experience and a reasonably fast device. It is worth its price.

So what do you personally think about this phone? Feel free to share with us under comments!