Apple announced the release of their newest Mac OS X software known as Mac OS X Mountain Lion. The new OS will include many features already found on iOS. This includes Notification Center which, when sliding toward the left, will be activated allowing you to view everything from messages to other notifications needing your attention. Mountain Lion will also include more iCloud features, Reminders, Notes, great sharing features including Twitter, and many safety features. One of the largest new features include Messages for Mac, which is Mac’s iMessage equivalent. We will take a look at what the software includes today.

What is Messages for Mac 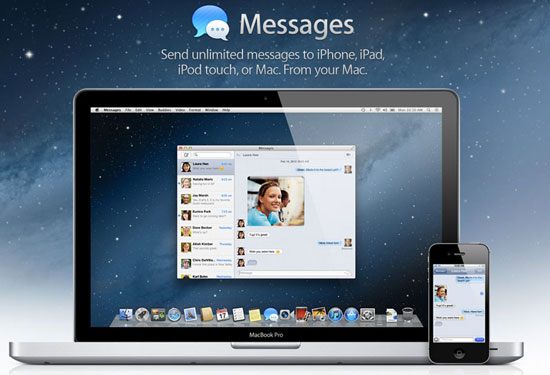 How Do You Start?

To begin using Messages for Mac, simply enter your Apple ID. From there, you can add and edit your accounts that you want to use Messages for. However, after sign in, you can already begin using Messages. It will use your Apple ID for login anytime after that. You can also select if you want to be reached at multiple other emails for Messages. Starting the application is very easy to do.

The interface is easy to learn and uncover. The full screen is split into two parts. The left side allows you to control your multiple conversations you are holding. The right side allows you to see the selected conversation. You can add recipients by clicking the blue plus at the top right corner. The bottom part allows you to begin your message. The left side also allows you to search through conversations and begin new ones. Once your conversation begins, you can see when it was sent and whether or not they have read it, just like with iMessage. You can begin a FaceTime conversation by clicking the video camera icon at the top right. If you don’t see it, then chances are, they don’t have an iPhone 4S, iPod Touch with video capabilities, or Mac.

All in all, I really enjoy the move that Apple made to make Messages for Mac a possibility. iMessage is a service I use just about every day with friends, family, and coworkers. Having this a feature for Mac is a great plus. If you want an official Apple  beta copy of your own of Messages for Mac, click here. Just make sure you do a Software Update to make sure it is the latest version. If not you’ll get an error message. The update weighs about a gigabyte and prepares your Mac not only for the Messages for Mac, but also the impending new OS coming this summer.