Google’s Google Plus is not the only social network that it possesses which has been marked by an abysmal failure. In the past, even though the advertising giant has had better luck running social networks; better social networks in the form of Facebook were born and started taking away all of the members present on Orkut.

A blog post published on Orkut detailed that Google was going to terminate support on the 30th of September, finally putting an end to the desolate social network after a decade of being functional. Google has advised that if people still use the social network (which is highly unlikely), they should remove their data as quickly as possible before it is purged completely. 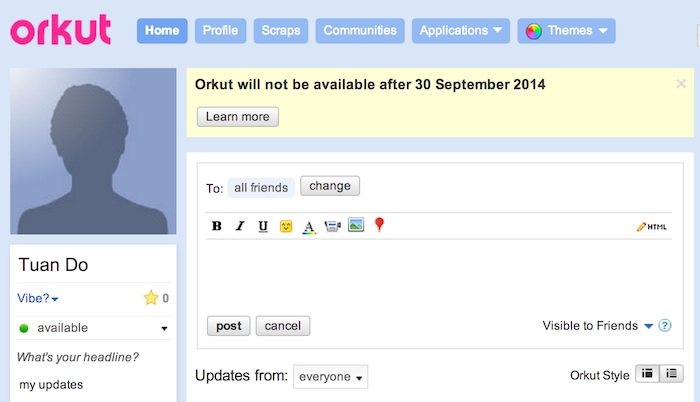 Even though the statement being said is true, Google has cut out the work of Orkut members looking to migrate their data to the new social platform Google Plus. Orkut users can successfully connect their profiles to Google Plus, but they will not be able to transfer any other data to Google Plus. In addition, Orkut users also can export their photos to Google Plus Photos, which happens to be a more expedient form for migrating data compared to the aforementioned one.

From a large list of experiments, Orkut happened to be those products that actually bore fruit for Google; which is the complete opposite situation for the company’s next social networking platform, Google Plus.

Orkut had gained Google Plus integration in 2012, and from the looks of that, it seemed as if the end was nearing for the social network. However, Orkut could never reach the popularity mark in the United States that it had gained in India and Brazil, making it the website with the highest number of traffic for years in those regions. Seeing as how India’s population crosses 2.5 billion; that will be a huge influx of traffic.