Google just updated their kitkat to 4.4.2 and with this update the feature called the App Ops has been removed. You could not see the feature unless you install a third party app on your smartphone and after that you could see an App Ops menu which would help you select which application you want to toggle On or OFF or allow permissions.

On asking Google about why they removed it in the new update, they replied “Consumers are not ready yet to use App Ops in the first place”, this being said we are still wondering why google would remove such a useful feature. 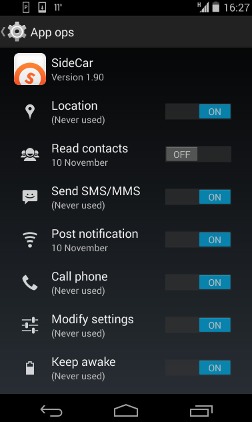 Even though the feature was available on Android 4.3 build till the latest Kitkat 4.4.1 update, Google said that the feature was there as an experiment and it was causing some applications to break and not work properly.

Electronic Frontier Foundation criticized Google in their blog saying that removing App ops was a big mistake because App Ops allowed users to select whether they wanted to permit an app, for the permission they would ask before doing something and control was in the hands of the users whether they wasn’t to allow it or not. Eckersley from Electronic Frontier Foundation said “The fact that [Android users] cannot turn off app permissions is a Stygian hole in the Android security model”.

Electronic Frontier Foundation is suggesting that they should install the App Ops again in Google’s next update and improve it as the app was working properly and it might have break an app when the user would deny the permission when it was truly necessary but aside that the security feature that App Ops allowed the users with were worth it.

Eckersley also said that with the App Ops features installed in their OS it looked like Google cared about the privacy of their users but after removal of this features we have our doubts about why Google would hold back such a functionality which help users to maintain their privacy. Google should try to add it in their next update as users who need their privacy would really appreciate to have it and use it.