Nokia has unveiled its next-gen Windows Phone smartphones – the Lumia 928, in the US which will be launched exclusive to Verizon.

The Lumia 920 successor boasts of a 4.5in OLED display capable of 1,280 x 768 pixel resolution. With 1.5GHz dual-core Qualcomm processor and 1GB of RAM the Lumia 928 is definitely one of the most powerful Windows phone devices out there. The device comes with 32GB of internal storage. 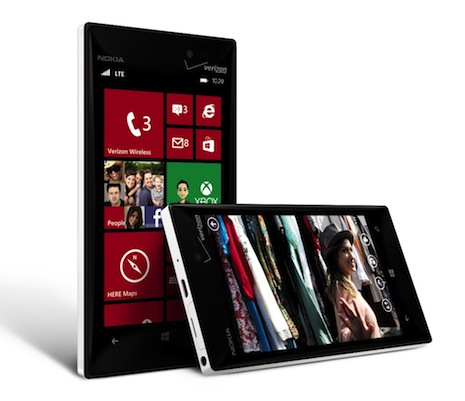 Nokia has equipped the latest Lumia phone with 8.7-MP PureView camera at the rear and a 1.2-megapixel at the front. The device will be available in the US starting May 16. To be available only on Verizon, the device will cost $149 ($99 after a $50 rebate) on a two-year contract.

Some of the other features of the Lumia 928 are as follow:

Lumia 920, which is currently available through AT&T, was launched last year and came with similar sized display capable of same resolution as the Lumia 928. The new Lumia device is lighter as compared to the 920. Lumia 928 weighs 162 grams as compared to 185 grams for the 920. Nokia is launching Lumia 928 in just black and white as compared to the colorful options of Lumia range.

There is no word on the availability of the smartphone in the UK as yet but, the Asha maker has scheduled a press event in London next Tuesday which will likely see the launch of Lumia 928 in the UK.

Nokia has been under immense pressure from its investors to boost sales in the US and the world over. The Finnish company managed to sell a record 5.8 million units in the last quarter but, still couldn’t manage to earn profits and registered losses of €272 million.