Till now all we have been hearing about is, Samsung working on their new smartphone the Galaxy S5 which is supposed to come out in February, but that is not it, Samsung might also be working on a new and redesigned TouchWiz UI for their next-gen smartphone like they do every year.

Evleaks which is a very popular tipster on internet nowadays recently released three screenshots of Samsung’s home screen panels, even though we are not sure if it’s going to be Samsung’s new TouchWiz UI but it sure looks like judging from the pictures.

The screenshots show a complete redesign of the TouchWiz UI we see on the current Samsung smartphones by changing the design of the icons, fonts and the overall look of the TouchWiz UI. The icon looks more rounded now. The new UI gives more of an artistic looks according to the screenshots with soft paint colors used in the background wallpapers. The new redesign of the UI shows a lot of changed icons and other things that includes Maps, Gallery, Play Store, S Health, Playbooks, Gmail, Internet, Messaging and Dialer.There might also be a widget that will contain different updates from all the social apps and show them in one place maybe just like we see on BlinkFeed seen on HTC. 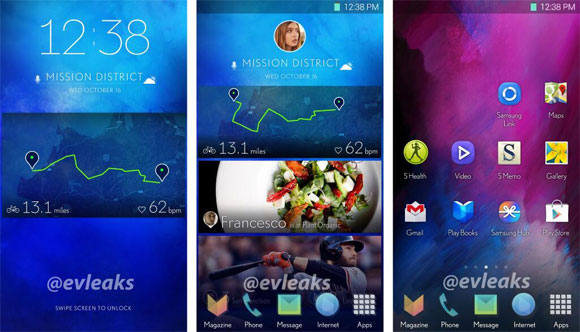 That was all we got from @evleaks for now as they didn’t mention anything else and no one knows if Samsung is going to bring a change to their TouchWiz UI or when it’s going to release it, but we do known that Samsung has confirmed that it’s going to come up with their Samsung Galaxy S5 during Mobile World Congress (MWC) which going to be held in February in Barcelona Spain.

A source like @evleaks has got a strong background track record and most of its leaks do come out to be true so we are hoping to see a new TouchWiz UI in February with the release of Galaxy S5. Aside from that Samsung might also come out metal body version of Galaxy S5 considering Samsung has been making their smartphones using plastic.