According to the most recent video seen on a website, Motorola X is going to be announced officially on 1st August. Once again, there had been another leak of the Motorola X along with a few of the specifications and the pricing of the new upcoming device and its variants.

This device is a bit of departure from Motorola’s recent designs. This device adopts a lot of curvaceous look with an understated design instead of the sharp lines and edges along with more radical materials for exempt the Kevlar for the black as used in Motorola’s previous mobile phones. 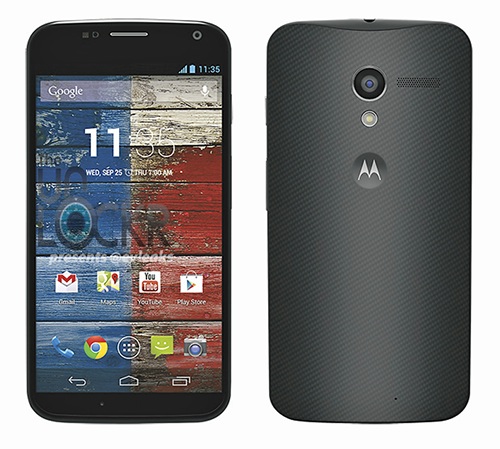 The front, according to the news, look like the Galaxy Nexus or the Nexus 4. The back of the device looks sober with a hump in the middle and a camera, lens, flash and loudspeaker. The back of the device is said to have simple dotted pattern. The device has a Qualcomm Snapdragon MSM8960DT, with a 1.7GHz dual-core CPU. It has Adreno 320 GPU along with 2GB of RAM and 4.7-inch screen. The pixel resolution of the display of the device is 1280 x 720 with 10.5 megapixel rear camera. Other than this, it has a 2.1 megapixel front camera, 16GB internal memory (12GB user accessible) and runs on Android 4.2.2.

There are also a few benchmarks. The AnTuTu score stands at around 18-19k and 7100 in 3DMark Ice Storm Extreme tests. The scores are impressive and it is amazing that the Motorola X was able to perform and achieve a higher score than the Galaxy Nexus 4 despite having two less CPU cores and identical GPU which the Galaxy Nexus 4 has a slightly higher resolution display.

Motorola wants the X device to be affordable and thus it does not support high-end flagship specs. It will be making up for the lack of the latest and greatest hardware by being free from custom skin and having more context aware features.

The pricing information about the Motorola X has also been revealed alongside the video with the 16GB model priced at $299 and 32GB model at $349. The price will be almost the same in the Europe as well even if the dollar and euro is not equal.