According to the news, a white Xbox One is not the only thing that the employees will get, the gift package includes few more things in it. Following is the expected list of things that they will get 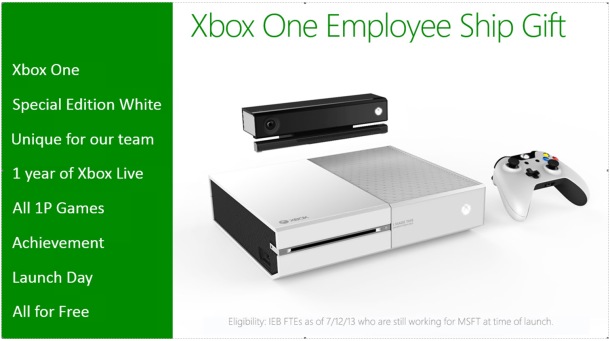 If you are thinking whether the employees have to pay any sum of money or have to work overtime to avail this gift, then you are wrong. The gift is eligible for all full time employees who are at Microsoft before 12th of July 2013.

White Xbox One is not entirely white as you can see from the picture. The sides are black and the Kinect is also black. This is very interesting to see that the Kinect device is still black while the rest of the console and the controller is white. This also rise some sort of speculations that the image might be a fake.

The controller also looks cool with the white surface on top and the back being black and the front side of the controller as well.