Microsoft has officially bought Nokia devices and services division for $7.2bn. The deal also includes all the patents and other services introduced by Nokia over time. The deal comes to as no surprise as many pundits were predicting a constant downfall to the Nokia smartphone market. Even when Nokia partnered with Microsoft and started selling Windows phones, many thought that Nokia need something more than that to survive the likes of Android and iOS.

It’s been long gone since Nokia used to hold more than 90% share of the mobile market. But with the successive development of technology and the new competitors in the form of iPhone and Android emerged on the scene to thrash Nokia from the throne.

The agreement reached between two parties includes few other interesting details as well. While Microsoft was already paying close to $2bn for the license of Nokia patents over 10 years, it paid another $4bn for the devices and services. There are a total of 32,000 employees that will shift to Microsoft division and among them, 4700 employees are working in Finland while the rest 18,300 are involved in manufacturing industry. According to Nokia, this deal will suit them as it will now focus on other emerging areas of the company. 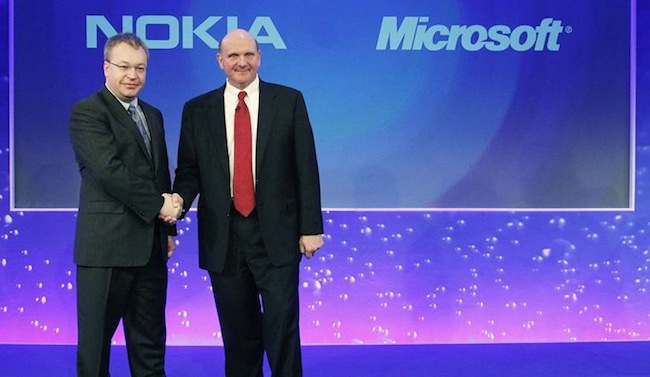 During the early demise of Nokia, almost all of the critics criticized Nokia for not being adaptive. It was though that Nokia and Google are over each other and that Nokia will not use Android as the main operating system in their device. Obviously, a company of that stature should have taken the necessary steps to avoid this day.

According to the Nokia press release, they will not be able to use the Nokia brand name for their own devices until December 31, 2015. This means that during these 30 months, Nokia can come out with a new marketing strategy that can help them revive once again and be the market king again.

Whether it will benefit the Microsoft or will it make the competitors more stronger – leave use comments down below and share your views with us.