Oppo is a famous Chinese company that is well known for its smartphones. Back in September the company announced its partnership with CyanogenMod and said that they will comes up with a smartphone, but the details of when the limited edition smartphone was going to release or the actual specs that the phone would have were not announced.

Another good thing about this smartphone is that it will be available globally and the device running CyanogenMod on it is customized in a way so that it works with all the features that the smartphone comes with. In case you don’t know about them, Oppo N1 has a rotating camera, a 5.9 inch HD screen that makes it a Phablet and a rear touch panel which is something new to smartphones. 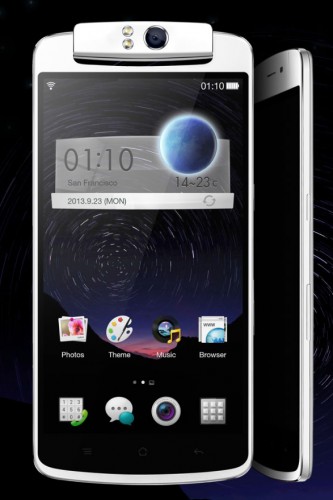 When it comes to the actual hardware on the phone it comes with a 1.7GHz Qualcomm Snapdragon 600 processor, 2 GB of RAM, a 13MP shooter and dual-LED flash. The Oppo N1 smartphone will have a special packaging that includes the logos of both Oppo and CyanogenMod on it. The special packaging will only come with the limited edition of Oppo N1.

Both the limited and the standard version of the phone will be available globally in December with Oppo’scolour OS. If you are thinking of getting the smartphone, the price is set to be around $570.

CyanogenMod is pretty famous for their customized ROMs and with a lot of fans already using their customized ROMs we are sure the partnership between the two companies will turn out to be great. The phone is introducing something new to the market like a rotating camera and a touch panel which we have never seen before on other smartphones and we are sure a lot of people would love to try it.