LG’s Optimus series has done well in the market and now is ready to release Optimus 3D Max with which it plans to be the forerunner of 3D technology in smartphones. Optimus 3D from LG is the maiden smartphone to be launched with 3D display and which can viewed without 3D glasses.

The phone allows the users to capture photos and shoot videos in 3D and then play them on the 4.3″ 3D screen. The phone is as heavy as the price of the smartphone and the weight and the price tag are proportionate. The 4.3″ 3D screen is beautifully placed in a black bezel which makes the handset ponderous. The screen bottom is marked with 4 touch buttons which are not in appropriate order and the menu button given the most important left hand position. The four buttons come with backlight but the buttons light up only come when you click on any of the 4 buttons making the backlight absolutely futile. This tubby smartphone is 11.9mm in thickness, much thicker than any of its competitor. The metallic strip which houses the 2 camera gives a nice feel to the overall black plastic cover.

The handset is equipped with dual-core Cortex processor of 1.2 GHz and 1GB RAM. With internal memory of 8GB and expandable up to 32GB the phone runs on Gingerbread, although everybody is now looking for Jelly Bean. The 4.3” display comes with 480×800 pixels of resolution. The phone comes with widget resizing and contains pre-installed 3D games. 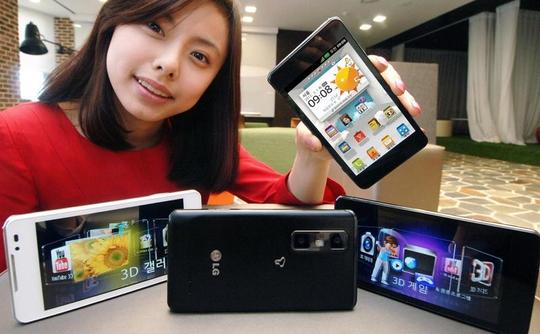 One explanation for the bulkiness of Optimus 3D is its two 5MP camera which work in association to allow you to capture 3D photos and shoot videos. There is a button to change between 3D and 2D settings on the side of the phone along with some basic Android photo settings. Digital zoom, several scene modes, self-timer, geotagging and various others options comes loaded in the gadget’s camera. The 3D photo gallery in the smartphone is nice with the presence of a 3D icon on all the 3D photos. Although the camera takes time to get into the operating mode but once in that mode the camera works fast and features like the Continuous Shooting mode allowing you to take 6 photos successively add more stars to the phone. The disturbing aspect of Optimus’s camera is that it will not allow you to take photos if the battery is less than 10% and you might miss some moments that were more important than saving battery of your phone.

LG has been known for making phones with worst batteries and this time also it stood to those expectations. The battery of this phone might be the reason for you to avoid going for this phone. It would have been better if the tri-dual phone had come with a dual battery. The 1540mAh battery is not enough to support your phone for too long if the phone is put to intense use. The pre-loaded games on the phone use the battery extensively and on a moderate use the phone just managed to survive a day. 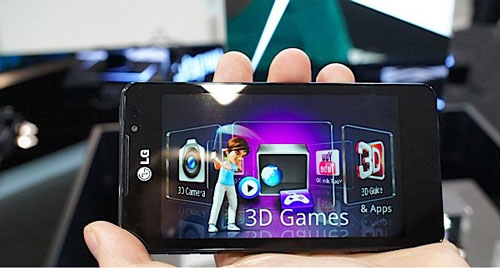 Optimus 3D Max from LG is a sturdy and powerful smartphone. The 3D glass-free screen is very impressive and it feels great to see it actually work. The 3D photos are superb including the pre-installed pictures as well as those which we capture. LG has increased its level by introducing some very useful customizable options in the Android. The display of social networking sites like Facebook and Twitter on the homescreen is a well thought feature. There is also an option of controlling the music player when the screen is locked and it is very handy. Web browsing experience is also terrific because of dual-core processor working backstage and the high-resolution screen making the text easily readable.

Although Optimus 3D from LG is powered by a dual-core Cortex processor but it is not that fast and some x-factor is missing in the phone unlike Samsung’s Galaxy S2. The camera is slow and it takes time before the locked screen lights up. On the surface the phone is bulky and large. The phone is monstrous in contrast to its competitors. The battery life is not at all good. With just average use the phone had to struggle to pass the day.

If you were looking for glass free 3D technology in handsets then the high price tag of Rs 30,500 (around $500) for this phone should not at all be a restraining force since the 3D screen in the phone is stellar. The 3D photos and 3D videos shot are great and worth the money. But the problem is that you won’t be able to take to many snaps with that dismal battery. If you want fast smartphone with 3D screen then there are more options in the market which are much cheaper than LG’s product.