iOS 6 is finally here – for everyone else. As you all may know, I’ve had the pleasure to have quality time with iOS 6 for a while now thanks to Apple’s Developer Program. However, even with this “exclusive” access, one thing that was off limits was Passbook. We were greeted with a page telling us everything Passbook could do, but we couldn’t try it out then until they became available for everyone. Now, after about a day and a half with Passbook, here is a bit more about the feature, our experiences with it, and information you should know.

What is Passbook, Anyways?

PassBook is a formal way to keep your tickets, coupon codes, gift cards, and other payment methods. While you won’t be able to leave your wallet behind just yet, it can certainly make you use gift cards a lot more and cuts down on the load you have to carry with you when you go places. Passbook cards can be used through enabled apps (more on those in a second) and through those added by yourself. 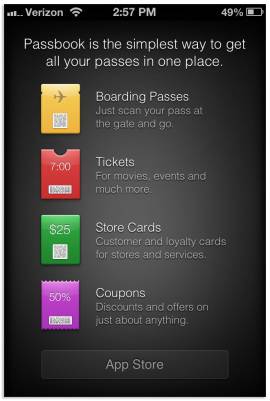 The Faces of Passbook (how it looks, how it begins to work)

So how does a pass in Passbook look? That depends on each one. While the setup is usually consistent, the design itself depends on the store associated with it. The color schemes may change, most have a logo, and there may be another image added to the pass. The passes use QR codes, which usually require special scanners. However, if the store can’t scan such cards, they may be able to enter the code ID below the QR code. 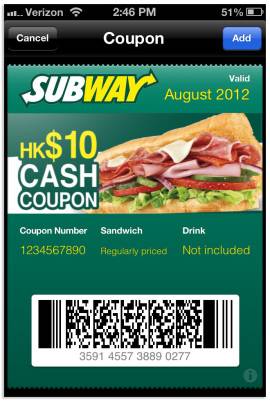 Passbook entices you not to forget about your coupons and other passes through notifications. When Passbook notices that you are near an airport, for example, you will be notified to open Passbook to view your flight ticket. If there is a change to your flight, you’ll also be notified of that news as well. Other examples include with commerce, for example if you go near a Starbucks, you may be notified to purchase from there. These notifications can of course be changed or removed all together.

Passbook is certainly a great precursor to NFC payment with the next iPhone. While before the iPhone 5 announcement, I thought Passbook was code for some form of a mobile payment system. That doesn’t, however, mean I’m disappointed by PassBook. It’s a great and convenient service that has some traction to grow in the future.

The passes aren’t available in the App Store, but are available through Passbook-enabled apps from the App Store. Below is a basic list of applications supporting Passbook passes already.