Just now, at the WWDC 2013, Apple showed the latest iOS 7 and Mac OS X 10.9 Maverick with a whole new set of features and options.

The iOS has gotten a new facelift that is great considering the Apple’s Vice President of Design Industry Jony Ive worked on it. According to Apple, Maverick includes more than 200 new features compared to the previous OS X.

iOS 7 defines the Apple’s mobile OS in a new way, bringing new design and features for the Apple devices. There are a lot of features that have been added but we will be focusing only on the major additions in the iOS 7. 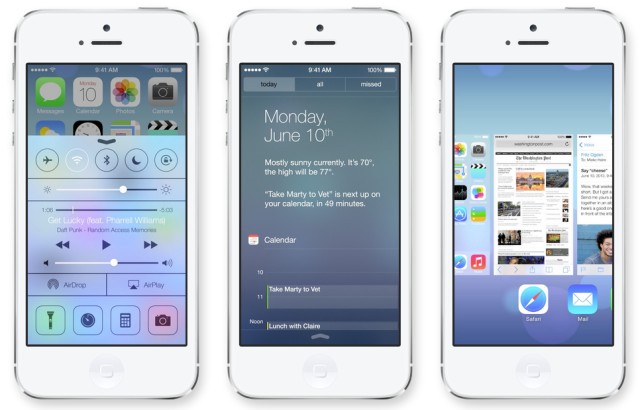 Although multitasking was previously included in the iOS but it has been improved and upgraded to add support for all apps including stock and third party apps. Multitasking also has a feature where it updates apps with larger data at that time when the network coverage is high.

Full screen browsing has been enabled and gesture based navigation has been added. There is only one bar at the top instead of two (URL and Search) and it can perform both functions.

This AirDrop app works in a similar way like the Samsung’s group sharing app does and the NFC tags as well supported by other manufacturers. AirDrop will work with iPhone 5, iPodTouch 5G, iPad 4 and iPad mini only.

iOS in the Car

This functiona has been improved a lot in the iOS 7. You can get the on screen menu in a number of cars, play your music, see directions using voice search with much more improved and responsive SiRi.

Just like the iOS 7, OS X 10.9 includes a great set of features that user will love to use on their Mac PCs and laptops. Few of the noticeable features are:

Introduction of tags – user can now put tags on their documents that can help them search the document easily.

Support for Multiple Displays – Apple has always struggled with multi displays but this time, Apple promised that they have improved it quite much and a normal user will not be annoyed by the ambiguity of it any more.

Safari, password management and notifications are few of the other things that have been improved in the new OS X 10.9

Apple has sure delivered what it promised in the form of new iOS 7 and we would love to see how developers develop apps around the new UI design and features.