When you think of updating your Facebook or Twitter status, it usually involves some sort of typing. This usually isn’t a problem. However, it can be a drag having to shorten your Twitter updates when you a certain number of characters. Think about how it would be if you didn’t have a character cap, nor did you have to type at all! Into_Now is a social networking application for iPhone that allows you to update what you are watching on TV. Your iPhone listens to a show in progress instead of you having to type anything. This makes it a quite unique application. Once your iPhone recognizes a show, Into_Now updates your status. It’s simple to understand, but amazing to see!

It’s quite amazing how Into_Now recognizes a TV show. To start, you first should launch Into_Now. Once launched, click the green TV button at the middle of your screen. There are then color bars that appear relative to your volume, this happens Into_Now gathers sound from the show. Into_Now is smart too, it recognizes when you try to register a commercial and kindly lets you know that you can’t check into a commercial. In addition, you don’t have to be close to your TV for the volume to get picked up, it has some good ears!

Into_Now offers you a schedule of programming relative to what you have already checked in to. For example, if you watched a comedy show, that comedy show will also be shown in the schedule and you’ll be able to see upcoming showings of it. The schedule is pretty easy to use. It’s important, however, to remember that the schedule is relative to show times and not shows them. This means that swiping to the right will show other shows in that time slot. This means that if you check in to a lot of your favorite shows, you’ll almost always have something to watch. 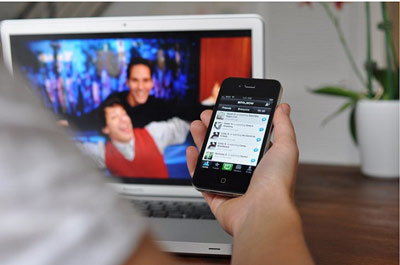 Some pros of Into_Now are that the concept is quite unique; there aren’t many applications with this capability. Actually, I am not positive if there are any applications with this capability. In addition, Into_Now can pick up sound pretty well. I tested Into_Now with my iPhone directly touching the TV, at a normal distance and far away on my bed. Into_Now was able to picks up sound and identifies your show, however it does take a little longer when further away. Some cons are that Into_Now needs a better-organized sharing feature and possibly a more extensive TV guide, so we can find out other shows that are on.

Into_Now deserves more users because it’s quite amazing. The unique concept, increasing popularity, points to a long last iPhone application. If you want a break from Facebook, or an application that you can incorporate into Facebook, then Into_Now is for you.