Apple has been granted a new patent – one that uses invisible ink, on-display barcodes, and next generation cameras for a login process on future MacBook laptops. The ink, printed under the glass on the front of your iPhone, or on the back of the case, would allow you to gain access to password protected files or to log on to your computer. Essentially, this technology will form a “digital handshake” between your MacBook and iPhone.

So – why would you want to use this technology? Aside from the cool-factor, this type of login process is much more secure than typing in your password. Someone could watch you – or film you – typing in a password and figure out what your password is by watching the keystrokes. They couldn’t do that with a “New Digital Handshake.” 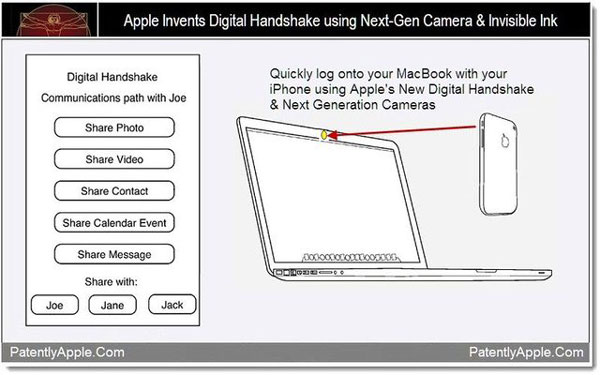 A digital key might be visible, but readable only by the other device, or it could be invisible to the human eye via the use of invisible ink. The code or key could contain a serial number, device ID, or other information unique to that device.

So, how does it work?

Basically, both the handheld device (iPhone or iPod, maybe even the iPod touch) and your MacBook would have a next-generation camera capable of reading optical coatings and invisible inks. Those coatings and inks would hold a special key code. All Apple devices would have their own unique code. It could be in the side bezel of an iPad, or stamped into the back cover (or even case) of an iPhone. The camera from each device would identify the key located on the other device, and authentication – the digital handshake – would occur.

If invisible ink is used, then the camera technology would have to include an infrared light source, or a special filter to detect light that is not visible to the naked eye. Another option would be to use engraving, printing, or etching so tiny that no one could read it. That would require the camera to have zoom capability or special circuitry that would analyze the image and extrapolate the key.

Commercial applications could involve a user picking up a prescription medicine, or retrieving funds or other goods upon completion of the digital handshake. One would assume that the initial transaction (the filing of the prescription, for example, by the person’s doctor) would include the pharmacist receiving the key associated with the patient’s device. The patient would then go to the pharmacy to pick up his or her prescription, and would perform a digital handshake with the pharmacy’s device in order to identify him- or herself.

How cool is that?