The competition in the personal digital assistant race has been taken to the next level with Facebook’s introduction of M, its own version of Siri, Google Now and Cortana, but with what it says more enhanced features compared to those of the competitors.

So if you are living in the Bay Area, you might want to open now your Facebook Messenger and there you will see for the first M. At first, you will be prompted to view some examples of what M is capable of performing such as facilitating your transactions or looking for the perfect place to hang out with family and friends. 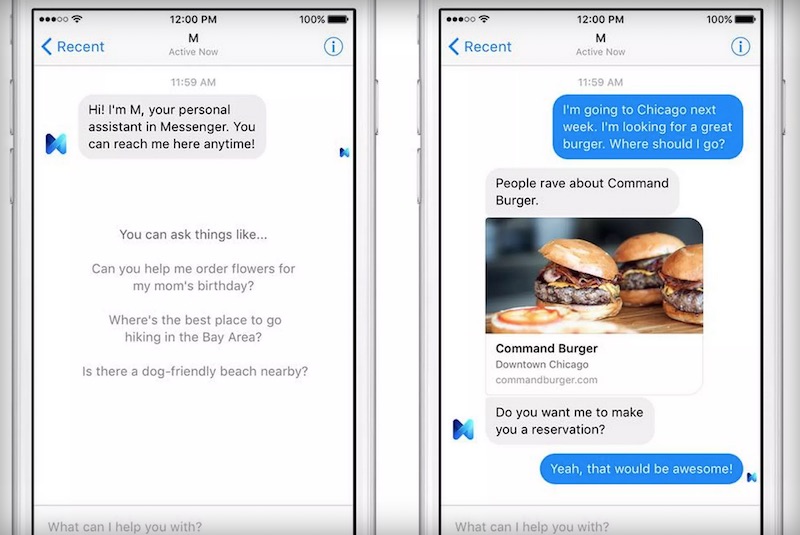 Facebook touts the new virtual assistant as also capable of exceeding the users’ expectations in terms of what it can do. And the social networking titan hopes you will come to realize it sooner than later.

Where does Facebook M differ from the other digital assistants? According to Facebook’s vice president of messaging products David Marcus, Facebook M is a synergistic collaboration among a cadre of experts that analyze the users’ various needs and the virtual tool uses artificial intelligence to predict what the users need.

That’s in stark contrast to the virtual assistants developed by Google, Apple and Microsoft. That’s because their products depend on technology alone to perform the various tasks aimed at helping to deliver the requirements of users. In this respect, Facebook really wins.

Other companies as well are relying entirely on humans to perform personal assistance for customers like TaskRabbit, whose method of responding to customers’ request is through its human resources only.

Facebook M is a combination of the two methods. While it is using technology to more efficiently perform digital assistance tasks, there are real people also that help to complete these tasks.

It is part of Facebook’s efforts to enable users to use Messenger for all their digital activities. There have been a lot of products recently launched to achieve that goal. Facebook M is only the latest in the string of new features to Messenger.

With Facebook M, the company intends to address the challenge of not having its proprietary operating system. With a virtual assistant, Facebook looks to become the first stop for all mobile users, therefore dominating the mobile race.

To use the new digital assistant, simply tap a button found at the bottom of Messenger and M will start to give you questions in performing the tasks you want to be done.

It does not also try to invade your privacy, as all of the suggestions M will give you are solely based on your responses to its questions, instead of your or others’ personal information.