Devices in the BlackBerry 10 Roadmap 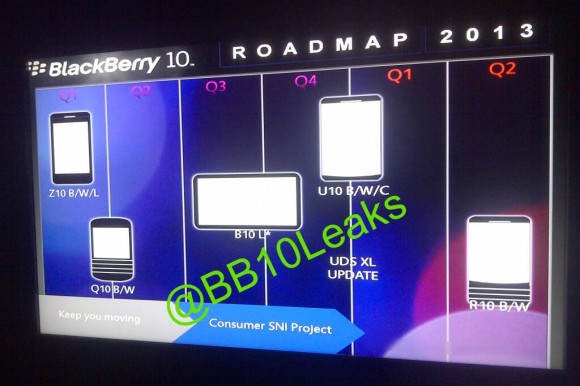 The next device, BlackBerry Q10, was supposed to be the 2nd in line of the BlackBerry 10 series to be released this year, but according to the leaked roadmap, there is something even more. According to it, the Q10 will be released in the middle of Q1 and Q2, somewhere between May or June. The Q10, as appeared on the image, seems to have full physical QWERTY keyboard design just like the traditional BlackBerry smartphones.

The next is the B10 L. This is the first device in the road map that looks like a tablet from BlackBerry. This is just a speculation and there is nothing about the size and features of the tablet.

Moving forward, there is BlackBerry U10. This devices, resembles a lot like Samsung’s Galaxy Note smart phones or we can say it, a phablet. The last device showed in the roadmap is the BlackBerry R10 which also seems to be a phablet but it is shown in the Q2 of 2014.

The image comes to as no surprise as the BlackBerry 10 is recently launched by BlackBerry and the company is hoping to fill the current brand with new line of products to offer customers a much better options while choosing their BlackBerry smartphones. On the contrary, BlackBerry has also stated recently that it won’t produce any difficulties for the BlackBerry OS developers by introducing one device over another with a whole different set of features that they have to look for while making an application.