It is not any holiday today but it marks another milestone in the development of Google Play Store. Earlier today, Google announced that its store has reached 25 billion app downloads, the same milestone that Apple store reached 6 months ago.

Although Google Play is still behind Apple Store, Google is very proud of its amazing growth. Notice that they celebrated the 10 billion mark just 9 months ago in December 2011. This is representing the growth of 150% in less than 1 year. Meanwhile, we are also seeing the dramatic increase in the number of apps and games on Google Store in the last three months, from 600,000 to 675,000 now.

To celebrate, Play Store is offering awesome discounts within the next five days. Everyday, Android users will be able to purchase a collection of apps from top developers like Gameloft, Electronic Arts, Rovio, Runtastic, Full Fat and more for just $0.25. That is not all, we will also see special collections at special times such as 25 must-own movies, 25 banned books, 25 albums that changed the world or 25 top-selling magazines. The discount program is expected to boost the number of app downloads and it could help Play Store reach 30 billion mark before Christmas. 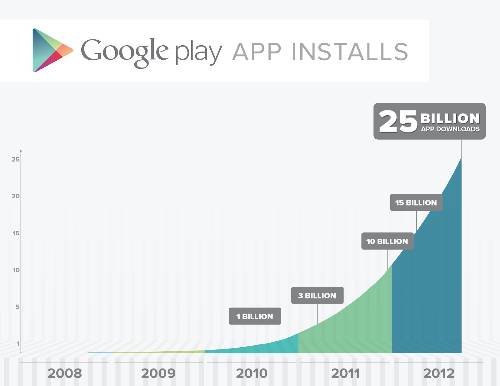 So, prepare yourself for the next five crazy days. Here are the list of apps slashed to 25 cents, collection of discounted books, movies and albums. Stay tuned as we will continue updating.

25 Albums That Changed The World